In our last post we pondered on the fate of textile crafts during this pandemic. In the next few posts we thought we would share with you some of our own Covid-projects. The Fleece to Fashion research team should have been in the archives in the Borders and in Shetland in the last few weeks but instead, forced to stay at home, we have been engaging in practice-led research, familiarising ourselves with the skills and techniques of the handknitter and crafter so we can better interpret what we find in the sources and understand and appreciate the skills of the knitters we are studying, or at least that’s the idea.

First up is Sally Tuckett, primarily a historian of 18th and 19th century dress and textiles, she leads the University of Glasgow’s Masters’ programme in Dress and Textiles Histories and is a member of the Fleece to Fashion research team.She is also a novice knitter.

Making as learning is something which has long been acknowledged amongst the craft community. Knitters, in particular, have grappled with this topic with an awareness of how the craft can open up opportunities for discussion from design process to practice and technique, to self-reflection (see, for example, https://www.knitrospective.com/blog/blog.html) and self-care.

The opportunities to incorporate this approach in my own teaching and research have not been as plentiful I would wish. The one success I had was when I was researching the Ayrshire whitework industry. This success was not in the production of an exquisite piece of embroidery that could be passed down through the generations, however. Instead it was in the realisation of the importance of personal interaction in learning a craft, the value of a guiding hand when it came to learning even just the basics. So the UK lockdown on the 23 March presented the golden opportunity for me to revisit the idea of making as learning, thinking about how new forms of interaction (Twitter and, to an extent, YouTube) might affect this, and to remedy what was clearly a fundamental failing in being the only member of the Fleece to Fashion team who couldn’t knit.

I’ve always been intrigued by knitting and I tried to learn a few times when I was younger, but consistently struggled with an inability to translate the right-handed instructions to my left-handed tendencies. This was before the days of Twitter, YouTube – the internet even – and my poor right-handed mum bore the brunt of my frustrations, valiantly trying to mirror techniques and explain to me how it all worked. I was interested to see, then, which way of learning I would find most helpful in my more mature (ahem) state: books, YouTube videos, or good old-fashioned personal interaction (video call). Armed with Stitch ‘N Bitch: The Knitter’s Handbook by Debbie Stoller generously given to me by Jeni Reid, two balls of University of Glasgow cochno yarn (other yarns are available), a pair of bamboo needles thanks to MLitt student Aleks Malec, and a whole host of support from knitters on Twitter, I was ready to go.

A lot of people had suggested various ways to learn left-handed knitting – mirroring the right-handed instructions, experimenting with continental, having a glass of wine to hand, not having a glass of wine to hand, etc. Stitch ‘N Bitch suggested the continental method and after a couple of false starts I realised my main problem was that I was not as left-handed as I thought I was. It turns out that my poor young brain all those years ago had been trying to translate something that didn’t need to be translated (sorry, Mum). Having switched to the right-handed perspective I was following my first very basic knitting pattern using the English method before I knew it. 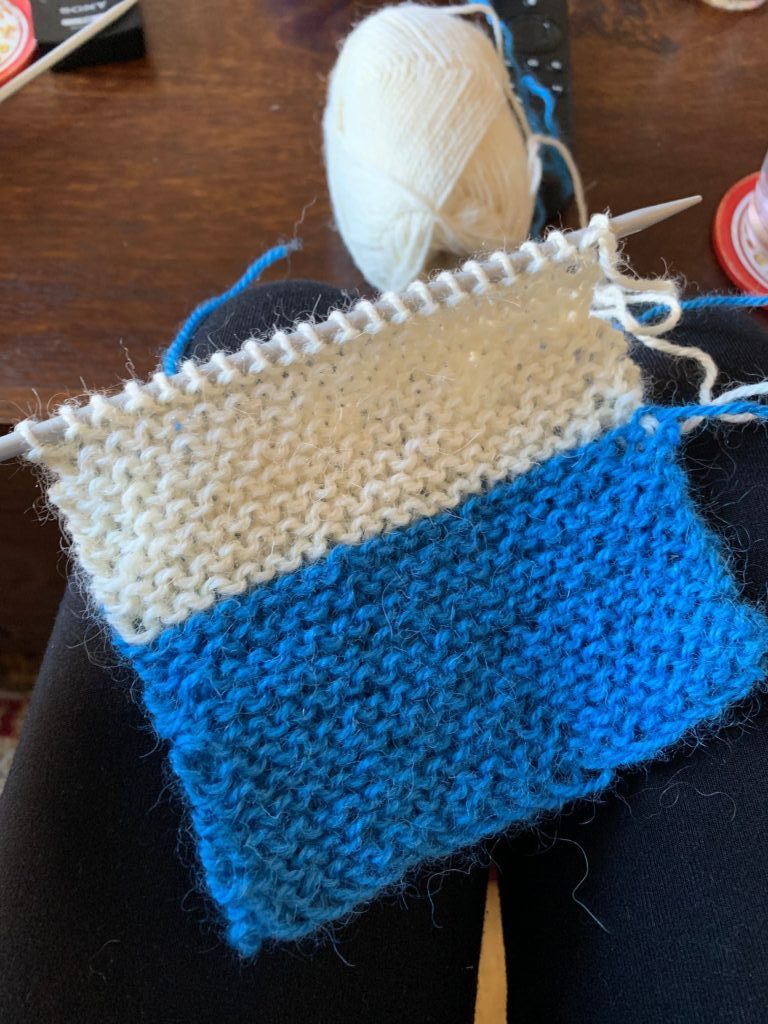 Since then my knitting journey has followed a pattern as simple and predictable as the garter stitch: 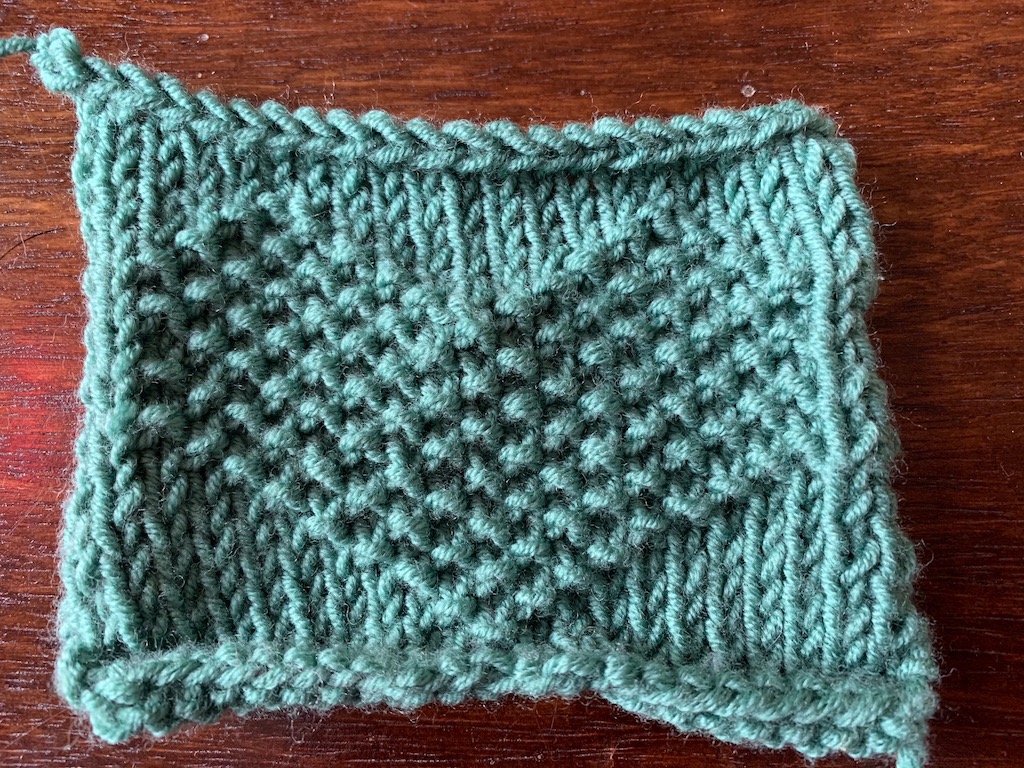 This is more of a magpie approach to learning than I was either expecting or I am used to, and is perhaps a result of the fact that during the current climate the opportunities to wander along to a yarn shop or join a crafting group are limited. Talking to self-taught friends, however, it seems to be quite a typical way to approach it, and this leads me to what is by far my favourite part of the whole process: the conversations it has opened up. Again, this is no doubt exacerbated by the lockdown environment but there is a simple pleasure in reaching out to friends, both known knitters and the ‘surprise knitters’ I didn’t know existed, and realising just how talented they are, benefitting from their experience and using them as a sounding board for my beginner’s frustrations. SOS video calls have become a regular feature of my knitting experience and the guiding hand may be a virtual one for now, but it is still so important.

So not only have I learned to accept that I am not fully left-handed, but that learning a new skill is not just about the skill itself, its about the new world of dialogue, thought and practice that it opens up. 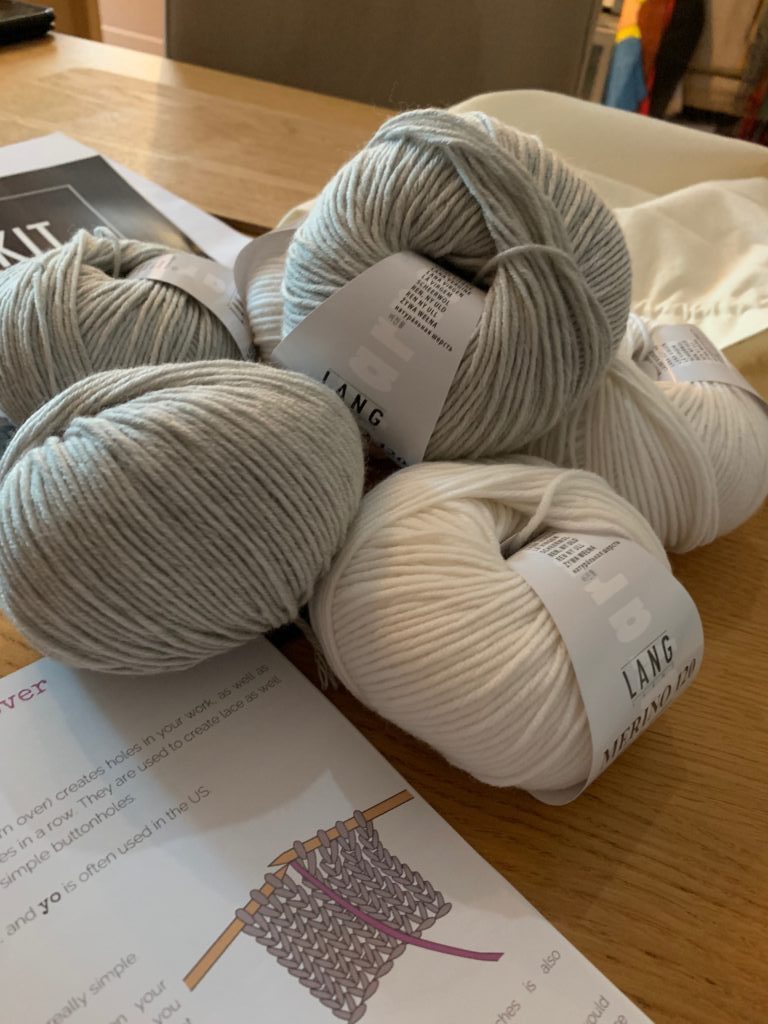 Moving on to project number 2.